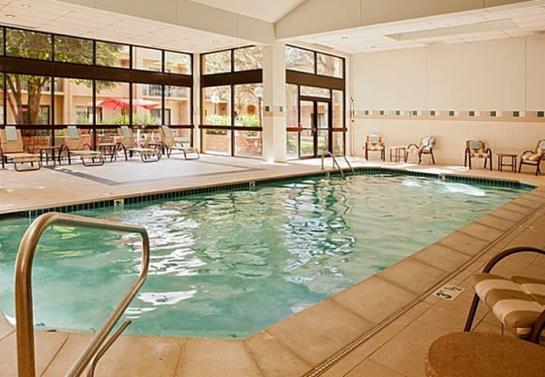 Located in Greenwood Village (Centennial - Tech Center), Courtyard by Marriott Denver Tech Center is close to Fiddler's Green Amphitheater and Park Meadows Mall. This hotel is within the vicinity of Centennial Center Park and Kennedy Soccer Complex. Enjoy recreational amenities such as an indoor pool and a fitness center. Additional amenities include complimentary wireless Internet access, a fireplace in the lobby, and a television in the lobby. Guests can catch a ride on the complimentary shuttle, which operates within 5 mi. Featured amenities include a 24-hour business center, express check-in, and express check-out. Planning an event in Greenwood Village? This hotel has 1247 square feet (112 square meters) of space consisting of conference space and meeting rooms. Free self parking is available onsite. Make yourself at home in one of the 155 air-conditioned rooms featuring flat-screen televisions. Complimentary wireless Internet access is available to keep you connected. Bathrooms feature shower/tub combinations, complimentary toiletries, and hair dryers. Conveniences include phones, as well as complimentary weekday newspapers and coffee/tea makers.

Courtyard by Marriott See more hotels in the same chain