This modern hotel is located in a quiet area of San José, 1.9 mi from the city center. It offers an outdoor pool, tennis court and... 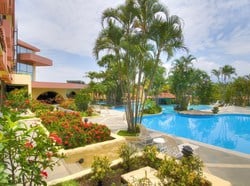 Featuring an indoor swimming pool, a terrace, hot tub and free high speed WiFi in all areas, this hotel is 5 minutes’ drive from the La...

Set next to Morazán Park and 0.6 mi from the center of San José, Holiday Inn San Jose Aurola offers views of the Central Valley. It... 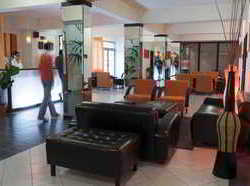 With a stay at Cocoon Hotel in San Jose, you'll be minutes from Children's Museum and Morazan Park. This hotel is within close proximity... 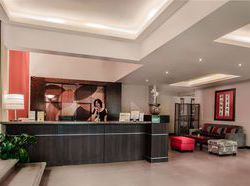 With a stay at Isla Verde Hotel in San Jose, you'll be close to Amusement Park San Jose and Spirogyra Butterfly Garden. This hotel is...

This hotel is an urban retreat in the heart of Escazu, San Jose’s most exclusive neighborhood. The hotel is located within the city's...

Featuring an outdoor pool surrounded by a garden and luxurious facilities, Doubletree offers a casino and a beauty salon in Costa Rica.... 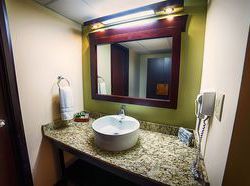 With a stay at TRYP by Wyndham San Jose Sabana, you'll be centrally located in San Jose, walking distance from Museum of Costa Rican Art...

A casino, indoor and outdoor pools can be found at Crowne Plaza Corobici, located next to La Sabana Park. Its bright, spacious rooms come...

Located in the Aristocrat Amon District of downtown San José, this hotel is less than 1 km from Simón Bolivar Zoo. It features an on-site...

Offering an outdoor pool and a restaurant, Auténtico Hotel is located in San José, 1640 feet from the Costa Rican Art Museum. Free WiFi...

Landscapes, nature, spectacular scenery: all this and more come together in Costa Rica, a natural paradise in which San José acts as a host, welcoming all as the capital of one of the countries most loved by nature.
San José/Costa Rica is one of the most frequently-visited places in the world. Hundreds of trips and tours are offered to enjoy the leisure of its tranquil beaches, calm slopes, beautiful forests and enchanting attractions. Take note that the point of entry and departure for this country is in José, the capital of the Republic and the centre of judicial and political power. Created as a canton in the 19th century, San Josés significance extends through only recent history as zone of passage between South America and North America. It is only since 1815 that Costa Rica and its capital have experienced strong economic, demographic and of course touristic, growth.
San José boasts many attractions, although in general the primary enchantment comes from the countrys volcanoes, rivers, beaches and forests. There are dozens of places that are worth visiting, making this an unforgettable destination. As far as the capital goes, one can visit the numerous theaters, the National Park, the National Museum or the Childrens Museum.
But any traveler or adventurer looking for an organized trip cannot leave without spending a few days in the surrounding environs. San José is the departure point for some of the earths most enchanting locations. Coasts bathed by the Pacific Ocean and the Caribbean Sea. Heredia, the smallest province in the country, contains the Barva Volcano, an attraction worth seeing, in Braulio Carrillo National Park. In the region of Guanacaste, the development of rural tourism takes the center of the stage that, and its magnificent beaches. In Puntarenas, or the pearl of the Pacific, we find ourselves in dense forests only a few meters from impressive beaches. Here we find Manuel Antonio National Park and the biological reserve of Carara. Cartago, or the Old Metropolis, owes its significance to its large catalogue of the countrys colonial art. In Alajuela one can admire some of the countrys most important volcanoes such as Poas volcano and Arenal. Finally, the province of Limón is remarkable for its combination of calm waters and dense jungles. And the truth is that Costa Rica, with its variety of unique vegetation and fauna, is a land that will impress anyone who cares to visit it.

In San Jose we will have moderate rain, light clothing is recommended as the temperatures will be warm throughout the day.

Points of Interest in San Jose

It depends on the category of the hotel. If you want to stay at a 4-star hotel in San Jose, the average price per night is €41, while you will pay an average of €34 for a 3-star hotel, and in a more luxurious 5-star hotel, you"ll pay around €60.

If you need a hotel with disabled access in San Jose, we recommend Hotel Presidente, Hotel Santo Tomas and Hotel Grano de Oro.

The best hotels in San Jose for adults only are Hotel Colours Oasis Resort and 1492 Hotel.

According to our clients, if you´re travelling with children, the best hotels in San Jose are Hotel Courtyard By Marriott San Jose Escazu, Hotel Grano de Oro and Hotel Santo Tomas.

If you want to save time, the hotels in San Jose with express check-in and check-out are Hotel Santo Tomas, Hotel Courtyard By Marriott San Jose Escazu and Costa Rica Marriott Hotel Hacienda Belen.

Some of the options for hotels with non-smoking rooms in San Jose are Hotel Presidente, Hotel Santo Tomas and Hotel Grano de Oro.