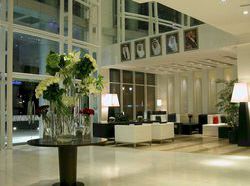 This contemporary style hotel is housed in the 3rd tallest tower in Riyadh’s Al-Olaya business district. It features a designer indoor... 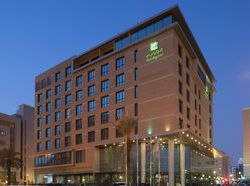 Conveniently located close to the highway and Riyadh's leading businesses and malls, Holiday Inn Olaya offers a tranquil base right in... 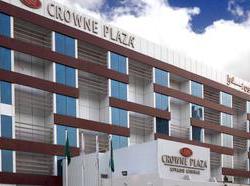 Located in the business district of Riyadh, this luxury hotel features a restaurant serving international cuisine and a fully equipped...

A buffet-style breakfast is served daily at Grand Riyadh?s restaurant, while à la carte dishes are available in the evening. The 24-hour...

Located in Riyadh’s financial center, this hotel is 1.9 mi from golf courses and the Olaya Business District. Leisure facilities include...

The 4-star Capital O 237 Andalusia Hotel is located in the heart of Riyadh’s Olaya area. It features guest rooms with modern furnishings...

Located in Riyadh, Four Seasons Hotel Riyadh is a modern hotel located in the famous Kingdom Tower. It offers an outdoor pool, a spa and...

Set amid 100 acres of beautifully landscaped gardens, the InterContinental Riyadh is a luxury hotel that combines peaceful surroundings...

Located in heart of the capital, conveniently accessible from both King Fahad highway as well as Olaya Street adjacent to all major...

Located in the heart of Riyadh, the Golden Tulip Al Nasiriah occupies a prime position on Al Maather Street. The hotel’s 184 guest rooms... 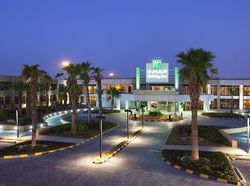 Bright, modern rooms with 32-inch LCD TVs and free Wi-Fi are featured at this 5-star Riyadh hotel. It has a state-of-the-art fitness...

With panoramic views of Riyadh, this 4-star hotel is located in the Olaya district and 0.7 mi from Riyadh Golf Courses. Al Waha Palace...

This luxurious hotel is located in the heart of Riyadh, just a 5-minute walk from The Kingdom Shopping Mall and Faysaliah Mall. It offers... 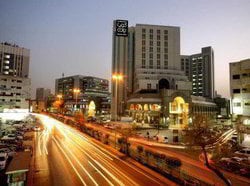 Located in Riyadh’s city center, this 5-star hotel offers a free fitness center and free Wi-Fi in all areas. Meeting facilities are...

Riyadh, the capital of the Kingdom of Saudi Arabia, is one of the most developed cities in the area, despite its location in one of the world’s most arid regions. While on the one hand, it’s a modern metropolis and an important centre for business, on the other hand, it’s one of the strictest cities of the region with regard to religion. The city is focused on traffic and there is hardly a major avenue that doesn’t avail of crosswalks and public transportation. The skyline exhibits two characteristic buildings that are easily recognizable: Al-Faisaliah Tower and Kingdom Centre, located between the two main avenues.

One of these is King Fahd Rd, and the other is Olaya Rd. Olaya is the most commercial street, filled with luxury shops and other businesses. To the south of the city are stretches of road with a less commercial atmosphere, where one will find typical local businesses. Riyadh is characterized as a city that isn’t particularly open to tourism, where it’s difficult to find one’s way around and where there are very few maps available. But, after all, isn’t travel supposed to be an adventure?

In Riyadh we will have clear sky, nice temperatures expected throught the day.

Points of Interest in Riyadh

Are you reserving a hotel room in Riyadh and have no way to get there? Book your flight now with Destinia!

It depends on the category of the hotel. If you want to stay at a 4-star hotel in Riyadh, the average price per night is €50, while you will pay an average of €107 for a 3-star hotel, and in a more luxurious 5-star hotel, you"ll pay around €101.

You can make reservations at Al Faisaliah Hotel, Hotel Four Seasons Riyadh and Hotel The Ritz-Carlton, Riyadh if you"re looking for a hotel with valet service for your visit to Riyadh.

If you need a hotel with disabled access in Riyadh, we recommend Al Faisaliah Hotel, Hotel Al Waha Palace and Hotel The Ritz-Carlton, Riyadh .

If you´re looking for peace and quiet and want to stay at an adult-only hotel in Riyadh, we recommend Hotel Crowne Plaza Riyadh Minhal.

According to our clients, if you´re travelling with children, the best hotels in Riyadh are Hotel Al Waha Palace, Hotel Four Seasons Riyadh and Al Faisaliah Hotel.

If you want to save time, the hotels in Riyadh with express check-in and check-out are Hotel Al Waha Palace, Hotel The Ritz-Carlton, Riyadh and Radisson Blu Hotel Riyadh.

Some of the options for hotels with non-smoking rooms in Riyadh are Al Faisaliah Hotel, Hotel Four Seasons Riyadh and Hotel Al Waha Palace.

If you're bringing a vehicle, we recommend that you book a hotel with parking in Riyadh, like Al Faisaliah Hotel, Hotel Four Seasons Riyadh or Hotel Al Waha Palace.